I spent the last few days of my summer getting lost in the city of Paris, where Versailles is not far off. It has been twice since I entered the castle and yet everything still amazes me. The rooms were beautiful and grand, and despite the French monarch not ending on good terms (does a monarchy even end in good terms?), I have to admit Versailles must be a pretty good place to live in. You can go on and on in the halls (or the vast garden!) looking for someone and you might never find them immediately because the grounds are huge. If I can go live back in time, I think I'd like to experience living in Versailles for a day. I got to see how life in Versailles was through Farewell My Queen. It gives viewers exactly that: a life in the palace surrounded by people from different walks of life. What's striking about it is that it records the historically important moments during the reign of King Louis XVI, which is the storming of the Bastille. It gives a glimpse of the life and politics that goes through the walls of the once (and still) grand palace of Versailles.

The film records the last days of the reign of King Louis XVI, but it's not the king whom the film focuses on. It's the life of a young woman named Sidonie Laborde. Sidonie is the queen's personal reader, one of her staff. She lives amongst other servants such as herself, serving different dukes and duchesses that reside in the palace. She's quiet and seemingly innocent, but she tries her best to get to the queen's good graces. As the film unfolds, Sidonie finds herself in the middle of chaos, as the rebellion comes to its peak, and everyone in the palace begins to unravel, including her beloved queen as well. I like how Farewell, My Queen approached an historical event. It's not how Coppola approached it, using the queen's point of view. Having to see the events unfold through the commoner's eye gives them a realistic confusion, as intricate plans aren't exactly divulged to the lower levels, and they rely on the words and gossips from the higher ground, and these people themselves aren't even in the tight fold circle of the monarchy. It also gives an account on how chaos descends to the lower levels, as they are the misinformed. It was not only their masters' worlds that would crumble because of the chaos, but they themselves are affected as well. I think it's something that history fails to account for, because as Sidonie's final words in the film, "I will be no one soon", is accurately describing the rest of the population involved during this era.

Sidonie was played beautifully by Lea Seydoux (who I think is France's hottest property right now). Sidonie has that innocence in her, but with Seydoux's portrayal, she was painted as someone who also thought for herself, who was wise beyond what was given credit of her. She was always there to please the queen, even if it meant sacrificing herself to get to the queen's good graces. Sidonie wasn't also someone whom the queen just gets along with, but she has managed to make friends with the others residing in the palace. Her confidant was an old man who archives events, and she was close to the embroider. Despite being pushed around by some people, Sidonie still knows her place, even if she is at the queen's expense. Seydoux portrayed Sidonie down pat, and I couldn't imagine anyone else in her role. Diane Kruger made a beautiful Marie Antoinette. The queen was described to be lavish, and she was. She was a person who was always on a whim, and clearly distress doesn't do her good. While she manages to have screen presence, I felt that she sort of faded in the background when she had her scenes with Seydoux. Being the only two with prominent roles, Kruger and Seydoux managed to bring the film to life, as well with the direction by Benoir Jacquot.

The set and costumes weren't popping out with color, but they were classic. The beauty and lavish Marie Antoinette so desires could be seen in the different gowns she wore throughout the film. Even Sidonie's dress, while never changing, was a beauty in its own. The whole set looks very authentic (shot in Versailles). The film was visually stunning, from the gardens down to the hallways at night. The timeline of the film is of an important aspect as well, because it's in those days that we are able to witness the immediately crumble of the residents of Versailles, from those who immediately flee and abandon the royal family, to those who stay and try to usurp the rebellion. 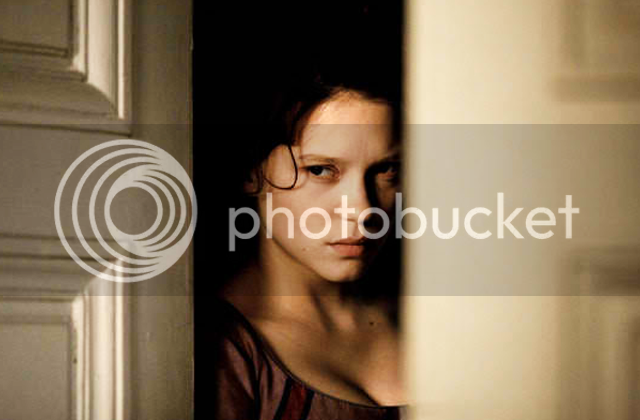 Farewell, My Queen brings the past back through recreating it in the eyes of common people. It's presented with great visuals, and performances. While it doesn't really discuss much of history, nor provide information about events surrounding outside the palace, it doesn't deprive the film from making its point: to show the life inside the palace. It showed how things ran, and how people are when they are at an advantage, and what happens when everything goes awry. Thinking about it, do I want to live in the time when there was chaos in France? Probably not, but I'd still want to try that one day in Versailles.
at 19.9.13
Labels: Diane Kruger, director: Benoir Jacquot, drama, history, language: French, Lea Seydoux, Virginie Ledoyen