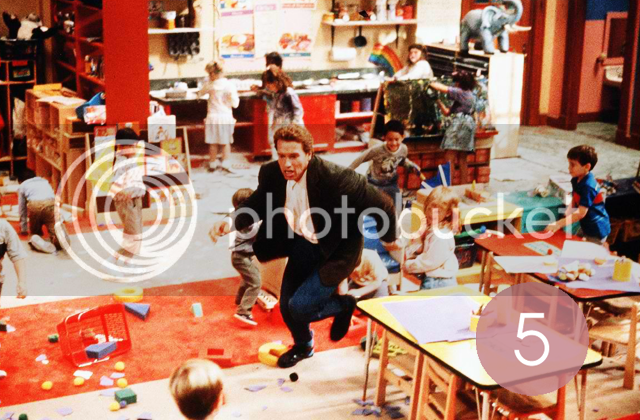 
When I was a kid I only knew Arnold Schwarzenegger as The Terminator. I haven't caught much of his work outside of that franchise, including his recent work. It's similar how Slyvester Stallone would always be Rocky, and Pat Morita would always be Mr. Miyagi from the Karate Kid series. One of the outside Terminator work I've seen him in is this, a light comedy about a cop pretending to be a teacher in order to foil the plans of an evil man. While this formula isn't as used anymore, I think it's safe to say that at least every action star has a kid-tandem movie in them. Just look at Vin Diesel, or Dwayne Johnson. Big men with children at their side. I think it's because somewhere in us (whether you like their movies or not), we'd like to see how big men handle little children. With the exception of actual fathers, it's a formula that movies play with time and time again.

As predictable as the title makes it to be, let's go through the story. A tough cop takes over a substitute job when his partner gets sick, therefore sticking him with a bunch of children while trying to find out the current identity of the mother and child they were looking for. At first he experiences difficulties, seeing as he himself never had a bond with his son, so he doesn't know how to handle children. However, the children end up loving him, and him loving the children and actually having fun while on the job. Of course this wouldn't be the action-comedy that it is without foiling the bad guy, would it? 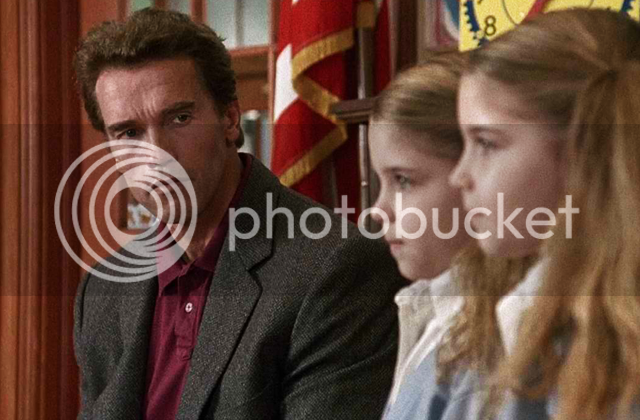 I found the movie too long for its story. There were a lot of unnecessary action, and the built up was taking its time. It dived into the connection he and the children were making, as well as his relationship with Joyce, one of the teachers in school. It could have been trimmed, as it just turned out draggy towards the last few minutes. There were a couple of laughs, and the children were adorable and scored a few jokes themselves. There was this one scene that triggered something in me, and it was my favorite scene in the movie. It was when one of his students was late, and he found out that the kid was newly injured by his father. That point would have to be the movie's darkest point, and for a man who has no relations to the kid would defend the child because it's not the way children deserve to be treated? That man just made himself a hero. Despite the comedy that it surrounds itself with, it still touches on bits of humanity, even if just a short while.

Kindergarten Cop is a light comic movie that shows Schwazenegger in a different light. However, while it may give a few hours of entertainment, it ran too long, overstaying its welcome. There are other lighter flicks he star in that are more entertaining than this.
at 9.9.13
Labels: action, Arnold Schwarzenegger, comedy, crime, director: Ivan Reitman, Pamela Reed, Penelope Ann Miller