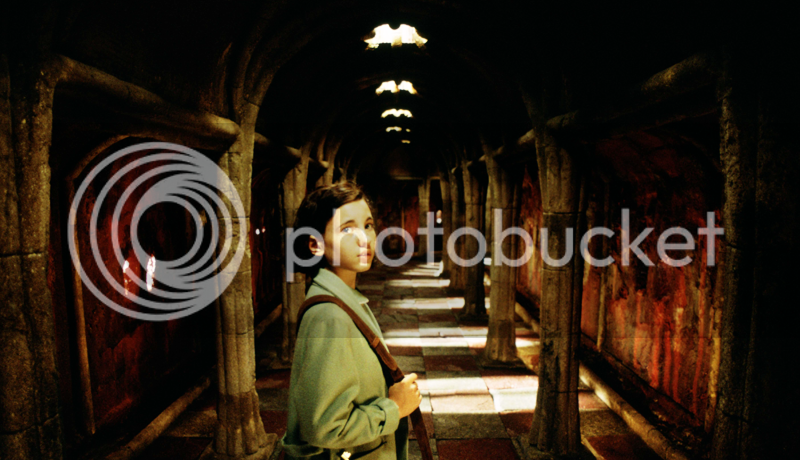 I think I found a suitable family film. Not only does it introduce children to a different, darker fairy tale, but it's set in a war period, so there's guns, violence and drama for the adults. Also, despite the bloodshed (and areas of bloodshed and ample slashing), I find myself wanting to watch the film over again - primarily due to the tale that's embedded in the fight. While I'm not quite versed with Guillermo del Toro's work, Pan's Labyrinth make a great recommendation in finding out more from the director, as it offers a fantastic tale that doesn't go short of getting you fascinated.


The war has just finished, but there are still troops fighting the rebellion in Spain, when Ofelia, along with her mother, were sent to live with her mother's new husband, the captain. The captain was a vicious man who liked having order, and was very used to getting his way. He showed no compassion for Ofelia, even if her mother kept on prodding her to refer to the man as her father. Ofelia's adventure starts when she discovers a fairy, who then leads her to the labyrinth that was just behind the grounds. There, she meets a faun, who proclaims her to be the long lost princess, and in order to rejoin her father at the underworld, must accomplish three tasks before the full moon rises.

The film was indadvertedly divided into two: the war proper and the fantasy world we find Ofelia in. While the war gives bloodshed, and reveals the real intent and personalities of the characters involved, I was more taken by the fantasy parts, wanting to see more of Ofelia's adventures, and that the world that she escapes herself in. The world itself was fascinating, and the creatures introduced were very different from typical fantasy creatures. The faun, for example - I didn't expect the faun to be that grand, but his personality and looks certainly added to the mystical parts of the film. The film, as a whole, was wonderful. There's no dull moment, whether it be at the world of the adults, or the world of the child. The film was also well-written, and since the director himself translated the work to its accuracy, I can definitely vouch for the statement. A quick word: I think it's a testimony to the film's work that it be translated accurately because how will it convey the same message if the words and intent were translated differently? I do commend Guillermo del Toro for that; it's not something that directors normally do. While the tale itself was great, I do have to wonder why del Toro would incorporate the tale in the premise of a war. Why a war? Why not take the tale and just blow it to proportions, having the entire film revolve around it? Are we bound to see beyond the manners and the ways of the people then? To see the injustice, from the various forms of bloodshed, to plain torture? Or was it so there's a point for escapism? The end of the film also had me wondering if there was a possibility that it was a figment of her imagination (though there are scenes that won't support the claim), and the final scenes provided with more questions than answers.

It was very difficult not to be taken away by the film. It was well written, and the visual work certainly supported the tale. The characters, particularly Ofelia, the captain, and Mercedes, had strong personalities, making them stand out from the film. The faun himself was an interesting character, and the pale man was a very iconic figure for this film. This film, I could imagine myself watching over and over again. Final Word: A wonderful piece by Guillermo del Toro. I've only seen minimal of his directing work, and this is certainly worth the praise.