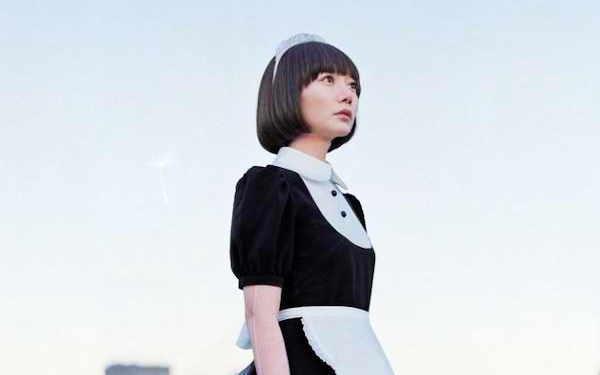 When I first read the synopsis for Air Doll, I thought that it would at least have a similar vibe to ‘Lars and the Real Girl’; since it’s one of my favorites, I dove into this one with a positive outlook. I expected that the movie would either fall on a fantasy-type spectrum, or a philosophical study of humanity. While it does fall under the latter, it was still way off from my expectations. Contains spoilers.

An average working man keeps an air doll as company when he is at home. In fact, the movie opens exactly to that scenario. The doll has a name, and he treats the doll like a human person. However, one day, the doll suddenly lived, and this is where the movie really begins. The progression of the doll is slow – she checks her surroundings, she picks up on mannerisms and phrases, and she explores parts of the city before heading home and resuming her air doll position. She also finds herself working in a video rental store, and falling in love with one of her co-workers.

My issue with this film is how underdeveloped the study of humanity is done. It goes in a direction where she explores her own feelings, but how could she comprehend them if from the beginning she wasn’t really aware of what her surroundings were. Even the people around her were nonchalant about why she kept asking questions, or how she doesn’t know what a birthday is. This movie requires a certain amount of suspension of belief but somehow its system is illogical. There were even subplots that were meant to tie in with the main plot but it seems unnecessary, as they don’t add to the film. At the end of it all, I’m not sure where I stand about this movie’s plight with human emotions. It had a potential to hit but it missed by a long shot.

This does have a few saving graces. Nozomi, played by Doona Bae is a likeable lead that despite the directionless feeling the movie went she would make you want to see things through the end. Another is when Nozomi met her maker. This scene plays out for five minutes, but this feels so important compared to most that have happened onscreen.

This is a film that you either like or hate. I really liked the concept but was disappointed by the execution – or it’s not for me.
at 23.3.17
Labels: Arata Iura, director: Hirokazu Koreeda, Doona Bae, drama, fantasy, Itsuji Itao, language: Japanese, romance