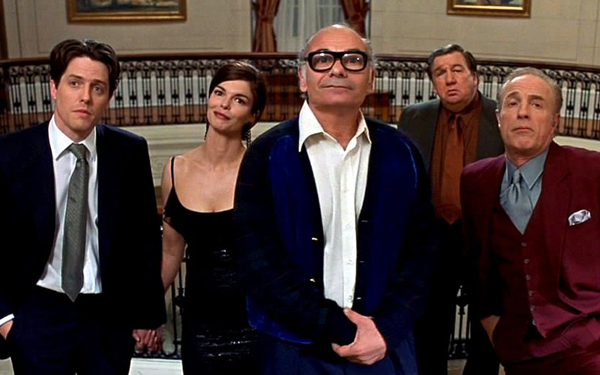 I think Mickey Blue Eyes can fall under one of Hugh Grant's lesser known or forgotten movies. It might have been popular at its initial release but this isn't a movie you would immediately associate with the actor. Grant plays a curator at an auction house who proposes to the love of his life. When she rejects, he finds out that it's because she belongs to a mob family. Now he has to figure out a way to keep true to his fiance while trying not to get himself involved with the mob.

The best thing about this movie is the casting of James Caan as one of the mob bosses and the father of Jeanne Tripplehorn. His scenes with Hugh Grant were the main highlight of the production even if the plot was spotty, at best. He knows how to work a weak script, and performance wise, Grant and Jeanne Tripplehorn paled in comparison.

An irk I did get from this is the source of the title of the movie. It was so forced, why even add it to the story? The reason wasn't anything special nor did it elevate the movie. I really didn't mind the movie title but when it gets incorporated into the narrative like that is a big thumbs down for me.

The premise of the movie was good. What failed is the execution of the story and the way it was written. The whole script played as an information dump without any natural progression. I think a premise like this could have worked and would have been a lot funnier if it was polished, or had done away with the romantic aspect. I could feel the funny trying to ooze its way out of the movie but was restrained. This has potential to be more than it is, but it made do with what it had.
at 31.7.17
Labels: comedy, crime, director: Kelly Makin, Hugh Grant, James Caan, Jeanne Tripplehorn, romance