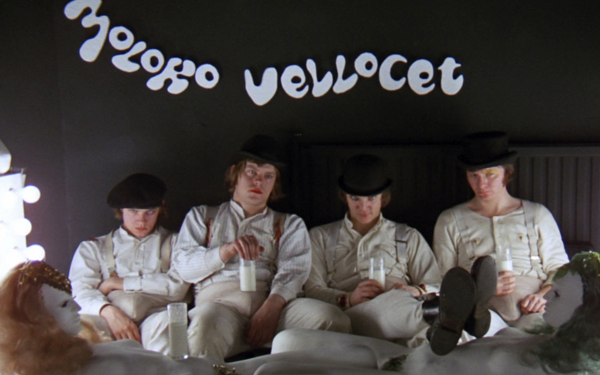 I didn't know much about A Clockwork Orange before putting in on my watch list. It was a popular film by Stanley Kubrick and has been referenced and parodied again and again in pop culture. It is hard not to associate the color orange, bowl hat, glass of milk, and a mascaraed eye with the film. Since I liked The Shining, I thought I would give this a go.

I was very confused for the first half of the film. Alex and his group are just wrecking havoc every night, with Alex narrating the whole ordeal (and the film for that matter). They drank laced-up milk, raped women, harassed homeless people, fought other gangs, and be horrible people. Besides being an all-around horrible person, Alex has a penchant for music, particularly by Ludvig Beethoven, a fact that will come to play a major part in the film. The second half is where things get interesting. Alex gets caught, and is charged with murder. During his prison sentence, he was chosen for an experimental treatment which somehow works, teaching him to abhor sex and violence. A whole consequential sequence occurs.

This was an excellent film in many ways. The acting was really good; Malcolm McDowell gives a wonderfully frightful performance. The script was well-written; it sounded eloquent. The narrative style worked for the film as well. I liked how the music juxtaposed with harrowing scenes. Some parts were uncomfortable to watch. The cinematography, sound, and editing were good. Even the bleak ending was fitting for the film. However, I didn't love the film. 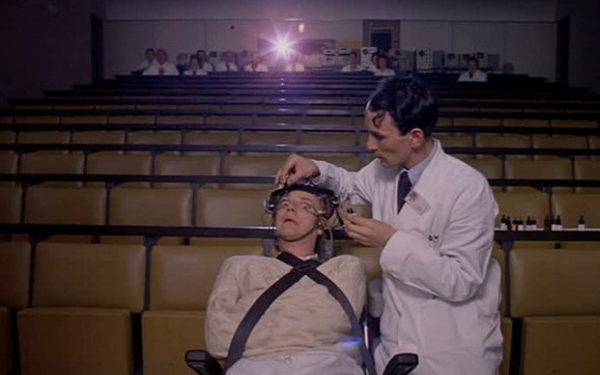 I think this stemmed from my initial confusion as to where the film was going. I was already halfway through and it wasn't going anywhere. I then went to read the blurb of the book the film was based from, just to give me a semblance of idea what the film was about. It did get interesting from the second half but I was already thrown off from the first half to give it the praise it deserves. It said in the blurb that this was going to dive into the ideas of morality and free will, and it does, but in a surface level. The film clearly has a stance about the issue, and it is evident with how the film ended. I was expecting more of a conversation, but I guess without that tidbit, I wouldn't really see that theme from the film. The film rather embodied the saying 'a leopard never changes its spots', even with the whole consequences act.

If taken at value, this was excellent filmmaking. I would have still been confused, but the technical and art side of it were of quality. Unfortunately it just didn't do it for me.

This is my October pick. Click the banner for the rest of my entries.
at 23.10.17
Labels: blind spot 2017, crime, director: Stanley Kubrick, drama, Malcolm McDowell, Michael Bates, Patrick Magee, sci-fi