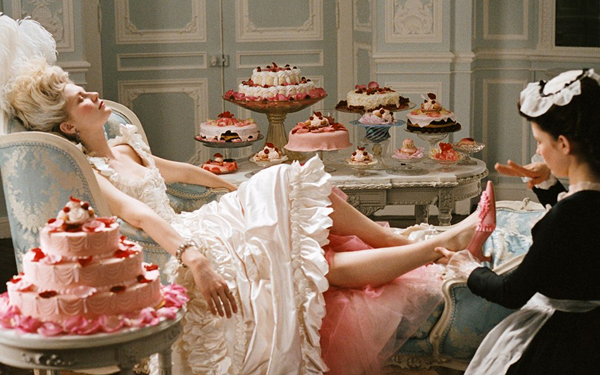 Sofia Coppola writes and directs Marie Antoinette, a loose retelling of the monarch's story - from her beginning as a simple wife, down to her extravagant living and eventual revolution. The retelling is notable for the mixture of classic and modern, making this receive mixed reception. However, I can safely say that this is the only Sofia Coppola work that I have thoroughly enjoyed from beginning to end.

The film really focused on Marie Antoinette, portrayed well by Kirsten Dunst. If one has no prior knowledge of French history, the film (though historically inaccurate) portrays the queen with a sense of humanity. She wasn't naive, nor was she cunning or speculative. The biggest fault that she could have had was that she was sheltered, and basked in her own world without bothering to seek out her constituents. Even the film could argue that her selfishness wasn't her fault. She had a husband who ignored her advances, a court who does nothing but whisper about her incompetence, a mother and adviser who endlessly nag her about court behavior and duty.

The film took liberties at historical events that happened during the time. It twisted events in a way that it would be viewed on her point, and an explanation would be given that instantly addresses the issue. This was something I don't mind at a film perspective, because it challenges the writer to find a plausible reason for an event from the non-historian point of view. Granted, a reality where the 'villain' is in denial of events is terrible, but from a creative standpoint, it's an idea I am open to. 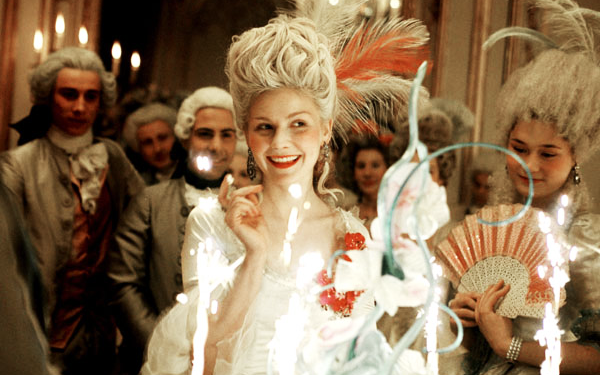 The film was visually stunning. The costumes were extravagant and beautiful. Of all Coppola's works I have seen, this seems to be on a different spectrum when it comes to pacing, and music, and writing - but this is the film that doesn't take time for the viewer to warm up to. This is Coppola's most accessible work, as it is the one that is easily digestible, but it doesn't mean that she compromised on quality. It still does feel like a Coppola film, but an approachable one at that.
at 2.4.18
Labels: biography, director: Sofia Coppola, drama, history, Jason Schwartzman, Kirsten Dunst, Rip Torn