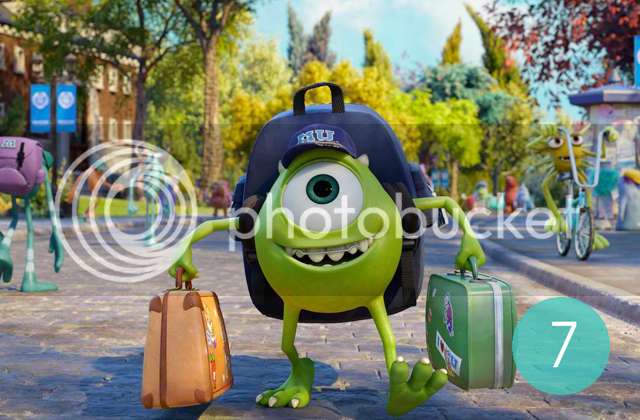 
This is the third month of the 5 Obstructions blogathon. For this obstruction, I've chosen to review Monsters University, a movie I haven't gotten around to reviewing. Because of this month's restrictions, I found it that it would be easier to write about a recent movie, as most would have probably seen it and share similar sentiments. This challenge mostly reminded me of the research paper process. Sources can be found under the cut. To the writers whose reviews I've used, if you'd like to find out what words I've lifted from your work, you can view a word document here.

Monsters University is, of course, a prequel. It’s a take on a story that should be familiar to any casual aficionado of college comedies. Monsters University brings us a look at the relationship between Mike and Sulley when they weren't exactly two peas in a pod. We find Mike Wazowski (Billy Crystal) and James P. Sullivan, aka Sulley (John Goodman) as freshmen [sic] in college. Mike has been obsessed since childhood to become a top scarer, everything he did was for a purpose and MU is the right place to achieve these ideals. Sulley on the other hand is a legacy, the son of a great scarer with natural talents that have gone to his head and made him lazy. It follows a formula that you've seen in any movie where a group of outcasts have to band together to accomplish something great. Though the conceit is old, the monstrous twist makes for lively viewing. We see these characters in new, more vulnerable situations. We get to see these two monsters become an inseparable pair.

The film is relentlessly charming, and surprisingly, very funny. There is no such side-plot to get in the way. There’s a new slate of colorful and inventive characters. Oozma Kappa offers up a new supporting cast of lovable misfits, furry and slimy twists on the freaks and geeks of old. One of my favorites is a scary dragon-esque character named Dean Hardscrabble voiced by Helen Mirren. The Scare Games friggin' rule! The last thirty (or so) minutes is an amazing final act. The animation is beautiful, and the creativity put into this is prominent. While Monsters University is a good movie, it doesn't quite top the original. It doesn't allow for as much meaning or emotion as the original packed in. The lack of originality in the premise and the plot prevent it from reaching the soaring heights of its predecessor, but it’s still heartwarming and a comical delight, serving up Pixar-esque teamwork theme with an unexpected lesson about life on the side.