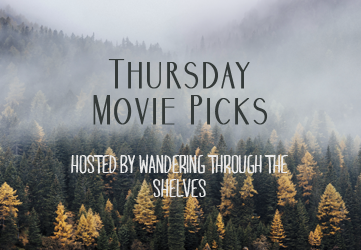 Thursday Movie Picks is hosted by Wandering Through the Shelves. Head over to her site to join in! This week is movies relating to romances. There's a lot of choices for this week, but I went with ones that are not exactly on the romanticized notion of romance. Here are my picks for the week.


Like Crazy - I cannot believe I haven't used this film for a Thursday Movie Picks. I feel like I mention this everywhere on my blog. This is my favorite Anton Yelchin, and Felicity Jones film. They play lovers who have to make their long distance relationship work when Jones' character overstays her student visa and couldn't get back to America. As much as I loved Yelchin and Jones' performances, my favorite performance would have to be Jennifer Lawrence's. She doesn't appear much in the movie, but her scenes with Yelchin were heartbreaking.

Band Aid - This stars Adam Pally and Zoe Lister-Jones as a couple who uses music as an outlet for their fighting. The actor roster in this movie is insane; I feel like a lot of their friends have made cameos in Lister-Jones' first directorial feature. It's an enjoyable film with good performances by both leads.

The Big Sick - This has Kumail Nanjiani and Zoe Kazan and is about a couple who had an eventful start on their relationship. This is a semi-autobiographical account of Nanjiani and Emily V. Gordon's love story, and the realism reflects throughout the film. The cast line up of the film is amazing, and helped bring the film together. Unlike the first two picks, this does not solely focus on the couple, as it does lean heavily on Nanjiani. Nonetheless, it's a good one to watch.
at 8.2.18
Labels: thursday movie picks