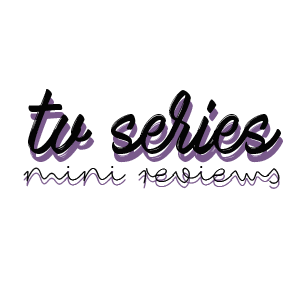 This is a mini-review post of new-to-me shows I watched between the months of January and February. I might as well churn out something with my binge-watching, and maybe this would motivate me to watch more new shows and catch up on the ones I've missed.

Schitts Creek (season 1 - 3)
Why did it take me so long to pick up this show? It is about a family who lost their money when they got swindled out of it and had to move into a town that they bought as a joke. It does take some time to warm up to the characters, but there is significant character development that doesn't jeopardize their personalities. Catherine O'Hara's performance is currently my favorite, and I am loving David's (Daniel Levy) storyline.  The episodes can be a hit or a miss, but it's an entertaining show nonetheless.

Ryan Hansen Solves Crimes on Television (season 1)
The title is the premise of the show. Ryan Hansen plays a parody of himself and he works with a LA cop (Samira Wiley) as part of his show from YouTube Red called Celebrity Vice Squad. It hitches its wagon on being meta, and it works due to Hansen's charisma. It could be a hit or miss, but if one is looking for a chill procedural, this could be it.

Borderline (season 1 - 2)
Borderline is a mockumentary show about border patrol agents in a fictional airport in the UK. There are only six episodes per season, and with a narrator explaining what today's events are going to be in the airport. The characters are likable, with each of them having different personalities. I found it to be enjoyable. It's a show that entertains and doesn't make you think too much, but it isn't a bore nor repetitive either. Try to watch this show if you're in between intense shows, or looking for something new to watch without much commitment.

Can't Cope, Won't Cope (season 1)
Can't Cope, Won't Cope is about two girls living in Dublin and trying their best at adulthood. This isn't one of those shows where they're living in a squalor and can't do anything to function or can't keep jobs. Aisling works at an investment office, and is always up for drinks and fun. Danielle is an art student who also joins Aisling in her nightly bouts of fun. The show may only have 6 episodes, but it doesn't take its time to show the cracks in the friendship of the two girls, as well as their own personal lives. Because it gets to the dramatic parts fast enough, it feels like you've been tuning in on the show for a long time. The show runner quickly reveal the persona of the characters without it being tedious. It ends in a sad note, but I am hoping that there will be a season 2.

One Day At A Time (2017) (season 1 - 2)
I love this show! The show focuses on a Cuban family living in LA. Penelope is a single mother who is a nurse and a war veteran. She lives in her apartment with her mother and her two children. The characters are amazing; each has a distinct personality that they bring to the show. It also deals with a variety of situations, from Penelope's PTSD to Elena coming out to her family. It also deals with a variety of issues like racism and immigration. Some of the episodes can be a bit emotionally manipulative, but I feel like a lot of people can relate to their family. It's a great show, and the wait for the next season is going to be long.
at 16.4.18
Labels: lists, television